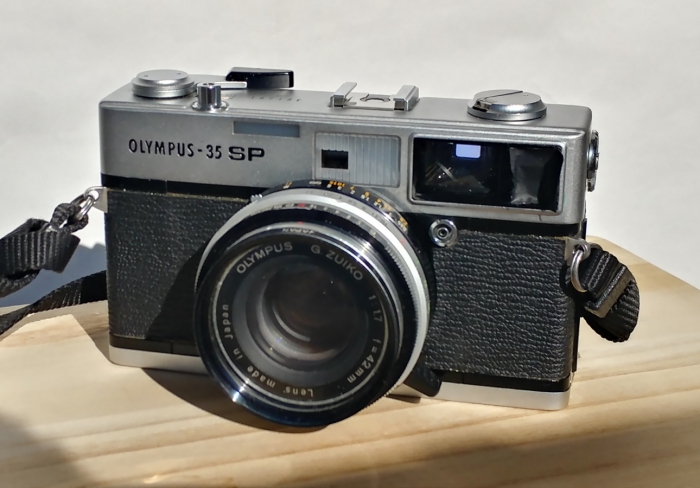 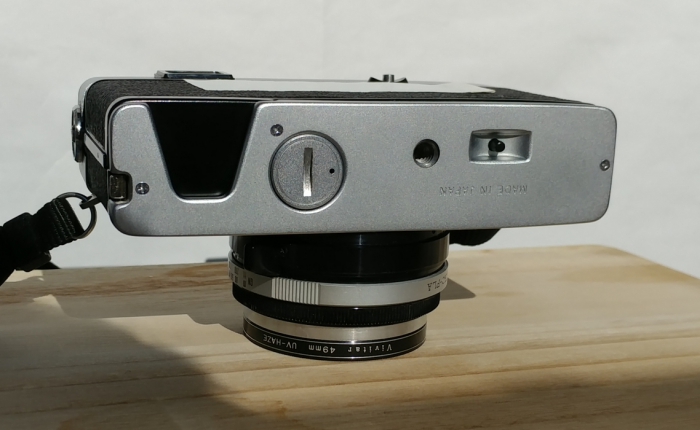 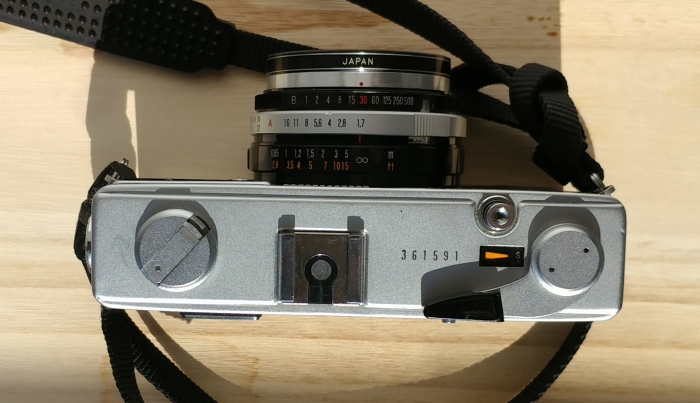 The meter is at the top of the viewfinder, expressed in numerical EV values. Nothing complicated at all. With respect to using an LR44 battery instead of the PX76, you can't just overexpose by one stop with the ISO dials like the Konica C35. I found dialing the thing to 50 ISO with 200 speed film. EV values stay constant throughout all film speeds so calibrating the meter with a light meter app on my phone is easy. The focusing patch is small but rivals the Konica C35 in brightness. The shutter snaps with a metallic flavor and it's really satisfying. I personally find whisper-quiet shutters boring as hell, so this doesn't bother me. It would bother me if it makes shooting speeds under 1/30 more difficult, but we'll have to see if the inertia of the shutter moves the body that much. The 35 SP also has an arm on the focus knob, a first in the functional cameras I've handled so far. The camera is undoubtedly better with it, considering its proximity to the camera body. The throw is only 45 degrees and it makes focusing very quick. Similarly, the advance lever is the shortest I've ever felt. The ISO dial is on the side of the camera, an odd choice but I welcome weird variety in my collection, it keeps things fresh.

The rangefinder was a bit off, the patch going beyond infinity. The adjustment screw is between the film rails, guarded with a brass set screw. Jesus tapdancing christ, this is the softest, tightest screw I've ever had the displeaure of dealing with. Loosened the thing with a bit of naptha and got to it after thoroughly gouging the screw head. The adjustment screw itself is deep in there, no issues with that. Fixated on some vertical objects off in the distance and calibrated the rangefinder to infinity. Close-up objects should focus just fine, but I tested it with a tape measure just in case.

Light seals are a bit of a mystery. The black foam seals so analgous to Japanese film cameras weren't present on the 35 SP. I think I saw some black wool instead of foam, but It's unsure whether they'll be sufficient. A test roll should elucidate things. 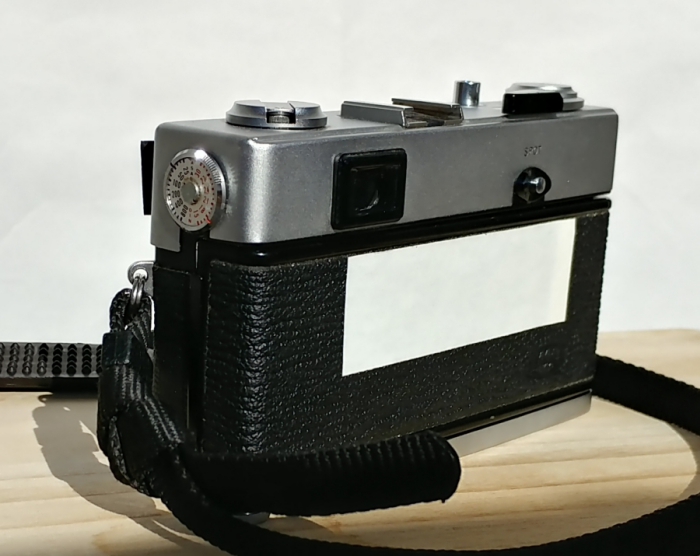 Of course, it's not perfect. The 35 SP is a large camera. It towers over the OM1/2, being maybe 10mm taller. A piece of piss after my dealing with the Electro 35 though. The lack of an interchangable lens mount, while eradicating the clutter of multiple framelines in the viewfinder, is a definite limitation that is worsened by the prospect of damage or fungus to your only, unremovable lens. And the big one for me is that the meter is not only uncoupled, but expressed in EV values. There's a reason why I avoided later Retina variants, to escape that shackles of exposure values. For the 35 SP, that means you'll need to get your EV value from your viewfinder, take your eye off to translate that into exposure settings, peer back inside to compose, and shoot. Tweaking the aperture/shutter speed will do nothing with whatever is going on in your viewfinder. For a lazy piece of fuck like me this motion is as convenient as uncoupled rangefinder/viewfinders endemic to early Leicas. If anything just ditch the meter altogether for a lighter, simpler camera. The shutter speed and aperture rings turn in opposite directions which is a bit odd. Time will tell if this bugs me.

This is technically my second 35 SP. The first, a rachety beaten-down SPn, was quickly returned on ebay.

1/13/2020 I'm throughly infatuted with this camera. Its size is perfect, feels great in the hand. The film advance throw is so short. The rangefinder is C35 levels of luminosity and size. Focusing is lightning quick with a short focus throw. The small rangefinder patch doesn't bother me at all. The uncoupled meter is unfortunate, but it simplifies compatibility of modern batteries and old CdS meters. It changes up how I usually shoot, thinking about exposure more deliberately.

4/18/2020 Almost didn't want to send these rolls off, I got pretty careless shooting off frames. The one with the 3 kids in particular, that would've been a good photo if I didn't leave the thing on program. fuck

5/22/2020 mmmmmmmm starting to feel a bit apprehensive about this camera now. Film advance and shutter release still feels fantastic but the uncoupled EV meter is getting to me. I've started to ignore it completely and shoot sunny 16, which at that I point I might as well get a LTM camera like the Canon P or VI-L. They bring interchangable lenses and a 1/1000 shutter speed as well. hmmmmmmmmm