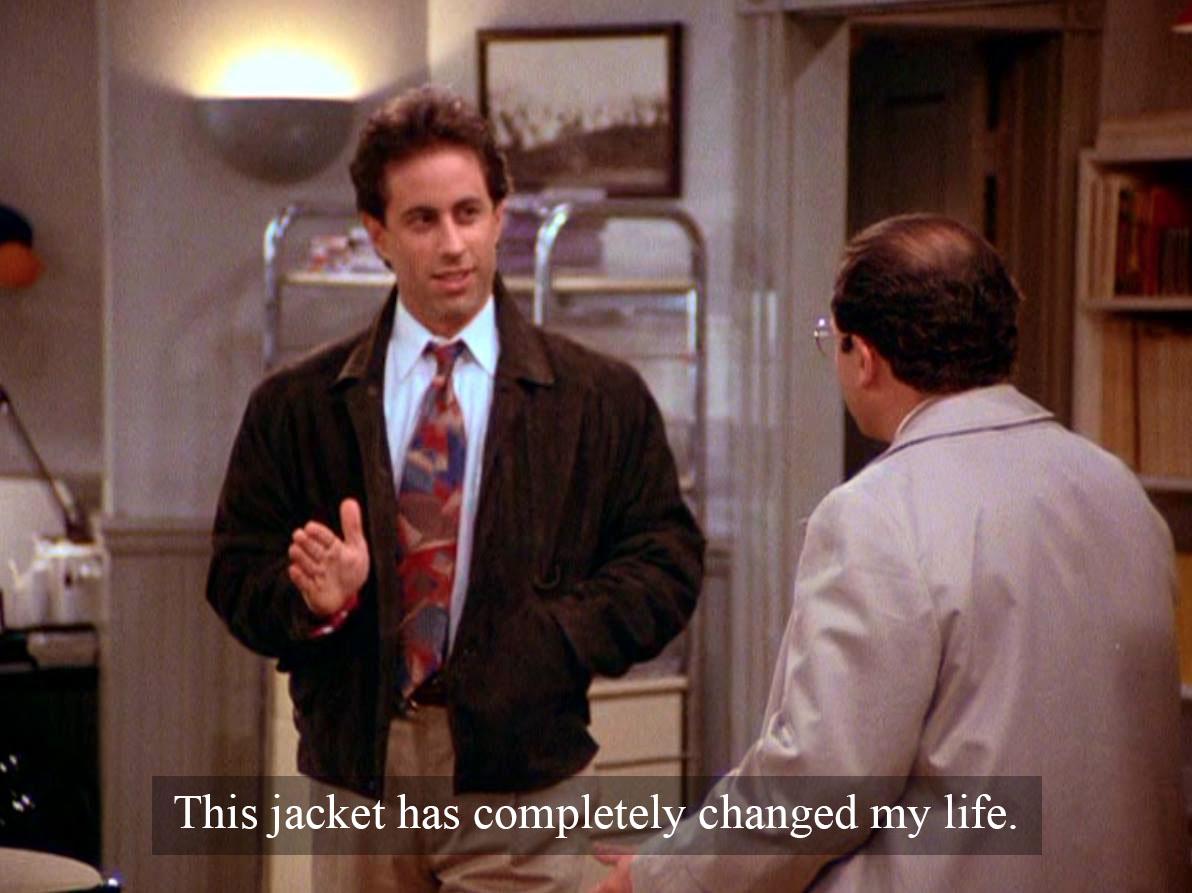 "The other day i was walking down a crowded street here in San Francisco, and i saw a women in a faux Ramones style motorcycle jacket-it was shorter and boxier, more blue than black, and I immediately thought whoa thats some bullshit, fucking w a classic, not riding a motorcycle, def not a punk in any way, just a poseur. Then I look at myself in a store window: straight legged Japanese Repro jeans from the sixties, vintage warehouse tee shirt, black logger boots, old fashioned mascot glasses. And i thought what a judgmental bullshitter. Now i know what gatekeeping is... I'm wondering about how all of you feel about your clothing choices... Like, again, i've written this before, ideas about authenticity, costuming, gate keeping. I guess i only gate keep in my mind-i'm a very judgmental person, trying to get over it-i would never say anything about anyones clothes but i might think it..."

Dressing up is cool. The internet has broken down barriers of traditional dress and localized trends, but I find the conventional channels of entry to still be incredibly constricting. Clothing is political, always has been since its inception. And because of that, sticking your head into /r/mfa or styleforum is a bit like wearing sandpaper undergarments. It's tolerable to a point, pleasurable even, but there's two persistent dimensions that constantly grate against your genitals. And especially so if you're American. It's not beaten over your head, but there's a definite stench that emanate from these communities, a set of presumptions everyone retains outside of fundamentals like color theory or silouettes: class and masculinity

Clothing's significance as a societal hackle cuts across civilizations throughout history. From regalia reserved for chiefs to starched ruffles and codpieces, its cultural use transcendental from exposure or modesty was everywhere. Outward indicators of class or even god-given validity was signalled through dress. While European peasants could only afford new linen farmwear twice a year prior to the industrial revolution, castle corner shitting aristocrats dressed themselves like OSHA FR demonstrations. Peacocking with your clothing was even interpreted as a direct challenge to royalty leading to restrictions on specific articles of clothing according to class.

A couple centuries later the conclusion to WWII reinvigorated domestic industry to a degree where American preoccupations of class gave way to cheap clothing. Peacocking gave way to a democratized and increasingly hegemonic style of dress, wool suits were traded for cardigans and t-shirts (Originally a US Navy undergarment). As anarchronistic as they may seem, denim jeans' enduring legacy was quite significant in an age of feigning class, one thoroughly repulsed by any callbacks to backwards rural life. And this trend of de-sacralizing clothing continued, stripping away hats and jackets from the collective expectation on how one should dress. Americans started to embrace classless dress as its own uniform, rejecting aspirational WASPyness and the rigid formalities of Europe. And with this gradual transition deviating from the spheres of "casual" is often seen as pretentious, unneeded peacocking. Rarity and formality are almost interchangable. Wingtip oxfords might as well be opera pumps in how they're seen by sweatpants-wearing members of the public. This flavor of fashion collectivism in a country well-known for its individualistic selfishness is strange. And these presumptions definitely stifled my initial enjoyment in clothing.

Similarly, reading thread after thread on /fa/ about "whether __ is suitable to wear under __ circumstances" makes me truly appreciate being in Japan. Those are too feminine, that's teetering into cosplay, all those qualifiers floating around are something I don't have to worry about anymore. The pathetic preoccupation with performing masculinity is ever-present in the online fashion forum, concentrating if it's populated by boomers. Debates over effeminacy, jinoistic little "made in america" croutons strewn over the sides alongside gas station dick pill ads, there's less meticulous judgement on a coroner's autopsy table. And there's no better thermometer than marketers shuffling under transnational corporations, the activities of collectives literally paid to find out how human beings act. Products for American markets often need to be "masculinized" in order to appeal to insecure burger sensibilities, manifesting into something as simple as a name change. And this trend cuts across hobbies, markets, and product lines. The utterly pornographic Nissan Fairlady series of the 70's turned into the Datsun Z. The Canon Kiss of 35mm fame was localized as the Canon Rebel. I'm surprised the marketers didn't just add flame decals to save some time. Or making Kirby scowl on every box cover? How utterly puerile. It's no wonder nothing followed the death of the suit, nothing could compare in raw masculine emanations. Maybe a codpiece adorned with flame decals?

But I'm guilty of all this judgement myself, I remember chuckling at effeminate pseudo-men wearing pastel capris back when I dressed like a Sears catalog model. Outward judgement precipitated into inward judgement. Without gatekeeping too hard, your enjoyment of clothing is often tied to your ability to ignore those immediate messages. Looking past the binaries of formality and masculinity, disregarding those connotations because they're hopelessly boring. Now I resemble a Star Wars extra on hot days. Who gives a shit. Traditional menswear will always be baffling to me though. Formality adheres to a set of rather rigid rules on color and fit: it's a uniform with little latitude for fear of looking non-traditional. No wonder every quirky 20-something pairs their grey suit with retina-cauterizing neon socks and handkerchiefs. Just seems like two converging ideas fighting for attention.

workwear/military surplus
Fast-fashion lookbooks are probably the best example of the artificiality that has much of the fashion industry by the gooch: selling volume, presenting lifestyles, it's a meaningless, commercialized pursuit. The arrangement is to be expected as an essential commodity, one that bumps shoulders with food and water. And perhaps my sacralization of plant corpses that we hang off our bodies is an overreaction. But while mainstream attention on sustainability and ethical consumption have passed over food in the 2000's, it lies latent within the world of clothing. Every few months there's a horrendous stream of news coming from Asia strewn across your screen like terrible little croutons. Multinationals point fingers at other competitors' sweatshops and shrug. The system is terrible, but to an acceptable degree.

Workwear around 2010 championed ethical consumption: Know where your garment was sewn, where the fabric was milled, where the staples were grown. Here's Takehiro, he was a NEET for 3 years after college, loves fishing by Enoshima, cheats on his wife of 8 years on the weekends, and sews your jeans in Okayama. But while transparency produces enough bravery to drop triple digits on clothing, it doesn't tackle the underlying issue: An informed consumer in the US buying garments shippied from Japan made by Egyptian textiles is not an ethical consumer.

Inmates at the Eastern Oregon Correctional Institute produce denim clothing to both supply its internal needs, and to sell online. The jeans and coats are distributed on a prehistoric website with the same dry, burecreatic, almost sanitory language like a DMV form. The phrases "reducing taxpayer costs" and "paying for their own incarceration costs" belt-tightening attitude now sits uncomfortably alongside facts about venal judges shuttling people towards for-profit prisons. As it so happens, the 1682-bed prison is the city of Pendleton´s fourth largest employer. For-profit prison being the most depressing word salad since "silicone woman" or "reddit poweruser." 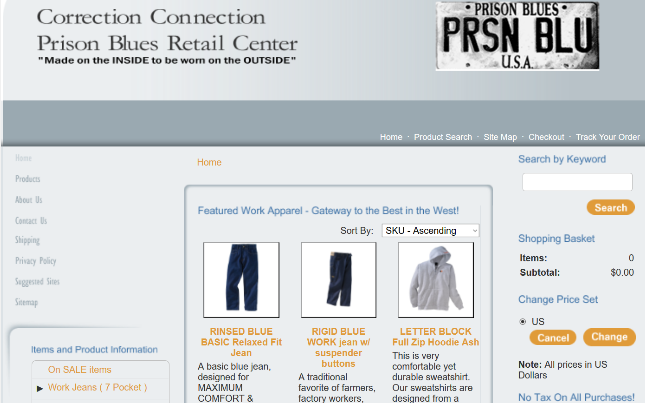 The website doesn't mention inmates are paid around $4 to 5 dollars a day for their work, much less that this is a desirable job within the prison. It isn't hard to see why considering the alternatives. Penal labor is an enduring institution in the US, the 13th amendment upholding it explicitly. Your favorite companies have taken advantage of prisoners being paid decimaled wages, even through an ongoing pandemic.

Prison Blues presented a dilemma to many workwear adherents. Legitimacy is one of the draws of workwear, and here was a source of US-made denim garments at inordinately inexpensive prices. Some forum users, no doubt acclimated to spending many times that on their superficial hobby, decried what ideologically violated a genre that championed union labor. Others didn't care.

The alternatives are similarly bleak. Multinational companies like H&M and Uniqlo have no pride like small-scale Workwear manufacturers or budgetary motives like local governments. They'll fabricate the trends and choose their suppliers according to what's most cost-effective to them. As long as they turn a profit anything under the current system is justifiable, whether it's subcontracted sweatshops with little oversight, destroying unsold garments, or using fabric made by slaves.

On the other hand, old military garments were purpose-built with an exact demographic and exact role. Within this, it's the specialized garments that really catch my attention. Mechanized troops, Paratroopers, Mountain troops, Arctic troops, they all have a different set of stipulations that neccessitate divergent design decisions. Mountain troops with double-breasted parkas, ski-ready square-toed boots, pass-through pockets, and lots of wool, all emphasizing retention and insulation. The designs are unapologetically pragmatic, unmolested by the aching libido of global capitalism. Shame about what they were used for.

*the following question template has been stolen from welldresseddad

How would you describe your style today, and what are your influences?

Closest genre would probably be Mori boy. Earth tones, varying textures, and a wide silhouette. I have inspo folders full of Hasidic Jews, Bedouins, Afghans, the drapey layerd outfits actually reminds me of traditional Japanese clothing. Miyazaki mountain hermit characters also get me hot and bothered. The original Star Wars trilogy is fascinating with all their practical effects and props. I've always liked the value proposition and purpose-built nature of military surplus so I initially gravitated towards mil-chic/japanese americana. Dyeing, tailoring was all I did. For camo I like very geometric, angular patterns. East German Strichtarn, West German Sumpftarn, Swedish M90, Urban-T to list a few. Linen and leather boots is also a fixation of mine. Once I move I might transition to wool. Excited to see what kind of options there are in cold weather clothing. I sew my own clothes. It's fun. I initially started to save money, unwilling to spend hundreds on artifical scarcity when the clothing looked like something I could make. And so I did, starting around 2015? It's a cheap hobby when two meters of cloth for $10 translates into a shirt. The process of drafting, cutting, hemming, and sewing also opens your eyes to how mind-manglingly underpaid garment workers are, crafting up incredibly complex clothing for $3 an hour. Upcycling from used clothes is an option if fabric is expensive where you live, breathing new life in something destined for the landfill.

It also makes you reconcile with your bad habits. I'm rather impatient when it comes to the stream of gratification from hobbies. Sewing made me slow down, plan, and improvise. It's by far my most steady and enduring source of hard work that always pays off. It's also made me comfortable with imperfections. A loose stitch there or an occasional crooked joint doesn't bother me: I'm at a good place when I'm much less critical of my own work. When making a small mistake you have to press on and fix it later. Afterwards you're so happy with the result that these small flaws don't matter.

It's reassuring to have a hobby with a continually morphing "end." Usually interest is extinguished once a particular something is in your hands within an acceptable budget, whether it's watches, pens, cameras, etc. For clothing your tastes and standards change constantly, there is no singular goal. Even if you have one specific outfit to work towards, wearing clothes is a daily mix and match, there's so many elements to one outfit. And so an "endgame" garment isn't really the center of focus becuase wearing the same thing everyday isn't fun.

back to top ⤴
Cosplay