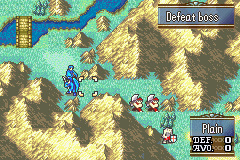 Playthrough with screenshots and gifs

It's strange to frame it like this now, but FE8 is probably my emblematic childhood game. I enjoyed it immensely back then, and I still play it in sickening intervals. My path with it was completely by accident: I just found this game at my Elementary school grounds. It was the age of Tamagochi and Pokemon Emerald, with our school being surprisingly liberal towards kids bringing their spoils to class. I popped in into my green GBA SP and was engrossed.

If my memory is correct, there were 3 saves courtesy of the previous owner. 2 on level 20 battling Riev and his Draco Zombie. I would later fuck up all 3 saves, but that didn’t matter since I would lose everything related to my Gamebody on a trip to Japan anyway. Progress is futile.

If you're unfamiliar with Fire Emblem or even its modern derivatives on mobile today, it's a tactical RPG with turn-based combat.The series started off on the Famicom and has maintained a symbiotic relationship with Nintendo consoles. FE8 is on the Gameboy Advance. You control units and manage their arms, stats, and even romance. We'll get to that later. The levels are well-designed and the art is really well done for sprites. Even after the indie game boom of the early 2010's, Fire Emblem continues hold its own in consistency and detail. Most impressive are the lovingly shaded maps and attack animations.

The story is a bit dry relative to later FE games, but the characters have enough charm to keep you invested. Meeting new characters is always a rush and it's even better after you recruit them. 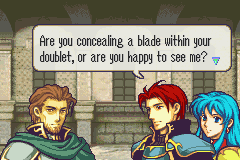 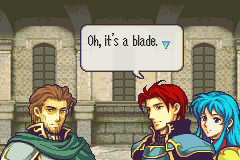 Unfortunately, the dialogue in FE8 is more sincere than this.

If you can tolerate siblings from its genre, the gameplay is great. There's lots of latitude in what kind of decisions you can make, from unit movement, equipped items, and complementing classes. The diversity of units makes playing varied and fun. Enemy archers are dispatched differently from cavalry, for example. Mages, monsters, emplacement units, bosses, there's no shortage of diversity or strategy that they entail. Levelling will always be a grind, but it's short in FE8 and the class progression gives you tons of options in the kinds of units you end up with. The threat of permadeath constantly looming over your head also makes playing a bit more compelling. The world map mechanic makes grinding and purchasing items stupidly easy compared to FE7 though.

Conveying what how gameplay feels over text is like playing the piano with your eyeballs. Here's a video. Why did you have to delete your channel Mel :<

A constant preoocupation when I play is the hoaring of weapons. It's pretty fun. Some you can only get as a bonus for saving civilians or houses. The Light Brand, for example, only has one instance where the player can get their hands on it. Others like the Wind Sword are only available at the highest levels of the dungeons. Both are versatile ranged swords which is quite uncommon. Items do have durability in this game, which means you'll often relegate your special weapons for bosses and such. Cheats can rectify that game mechanic however. Don't tho.

One massive gripe I have with FE8 is when you near the end. Human enemy units disappear entirely, replaced by monsters. Even after you finish the game, you'll never see those cool lookin knights again. Just mushy zombies. All those counter weapons you've cultivated are useless, as those unit types never appear again.

Yes, there is romance in the Fire Emblem series. You're an omnipotent god trying to get units to fuck, essentially. Their "support" is raised if the two are in close proximity to one another. Now supports aren't always romantic. How else can I emotionally cope with Erika x Ephraim or Garcia x Ross? Once you get a support, a cute little conversation between the two plays out. It's a fairly intoxicating experience honestly. Supports grant both characters stat boost but obviously that's not my main objective. 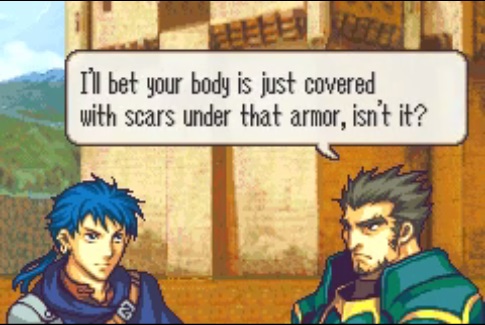 Hardcore fans desperately looking for Kaga’s tablescraps will say it’s the easiest Fire Emblem. There’s do doubt about that. The map and dungeons make leveling and progression easy. It also gives a lot of control on how you want to play. The fun parts about FE7 are working around those limitation of time and leveling. Accordingly, many players choose to bench characters with unacceptable stats. A bit of a shame, since you have to work harder for those support conversations. Not particularly needed in FE8. Even on harder difficulties you don't really have to factor in growths for characters. Except Kyle. Fucking Kyle.

Even if you're not a fan of slow, tactical RPGs, I implore you to give this a try. Clear out a day and hop on an emulator. There's so much agency and variety within this package of lore and complexity. The superficial story doesn't even degrade the worldbuilding or the playing experience. Modders have a fairly easy platform. Smut proponents will feel right at place. Plus, the new games have brought waves of new players into the franchise. Even if Kaga is gone, FE still lives on.

Myrrh is so fucking cool. Why are there child soldiers in my GBA game?

Oh. Her Dragonstone does only has 50 uses, but it can be repaired by Hammerne or cheats to “trade” it to enemy characters, forcing them to drop it upon their death.

Fuck the meta, diversity in classes is what I go for in my playthroughs. In that respect, Amelia is great. Once you finish the game once, a class called "Super Trainee" is made available. Despite the sprite staying constant throughout the super trainee's promotions, their stats grow exponentially, eventually even surpassing conventional units. And her animations are just rad.

You can promote her into a General, but why would you.

Her supports are also very cute, and I threw her together with Franz.

Syrene is also one of my favorites, despite being the last and weakest units you receive. Aerial units are receive extra damage by bows, which is an interesting debuff for high movement classes.

In terms of deciding on supports it's a true struggle. I usually go with Gilliam as the stoic couple but her background with Kyle is also compelling with that childhood backstory. Regardless, even the game calls the former pair a "perfect match" so no regrets there. Their back-and-forth teasing is also great.

I want seth to manhandle me

I used this thing for reference on almost every playthrough.

back to top ⤴
Fire Emblem 8