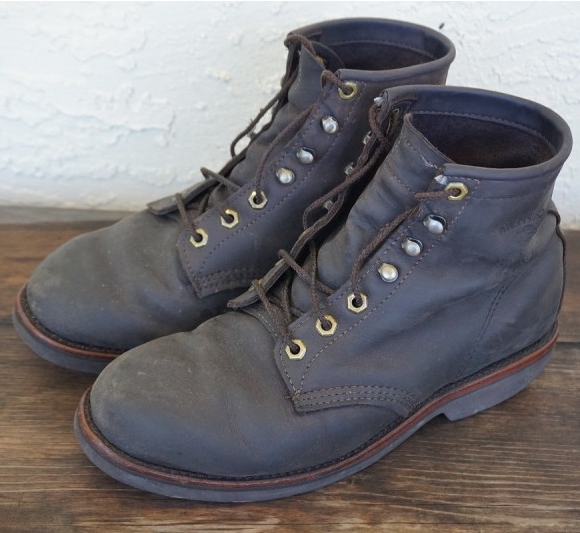 I love not spending money

There's a bunch of details about these boots I discovered in retrospect, but I'll just say that I recommend these, regardless of whatever else you currently own.

Got em for $80 in 2015, right around when I started college. Coming from sneakers, it took a bit to get acclimated with boots. Heavier, I actually have to lace them up, and I'm a bit more cognizent of where I walk. I was unfortunate enough to break them in during a vacation to a walking-country. 28 days of just walking, with an average of probably 14+ hours on my feet. Blisters galore but not once did my feet ache or knees explode, probably thanks to the christy-esque sole. Very soft, very flexible, and lasted me 3 years of regular use. Even today they're by no means unwearable, I'm just concerned with its current heel height. 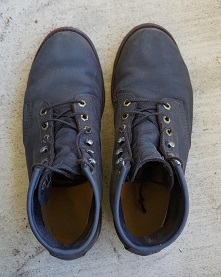 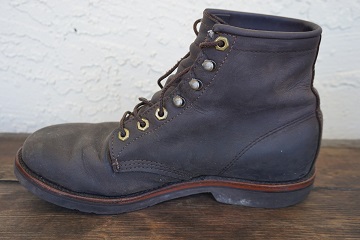 Creasing is inevitable with leather footwear. Quality is usually determined by how gracefully they age, not unlike your skin as you rapidly shuffle towards the grave. Theese are clearly a step down from Red Wing. The nubuck leather is thinner, and you're in allah's hands when it comes to clicking. My pair have been spared from the curse of vein-like creasing, but you can see others who have been sinnin' 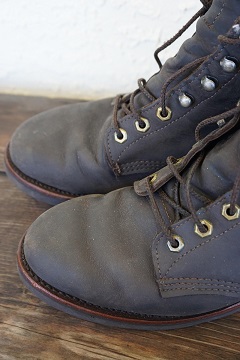 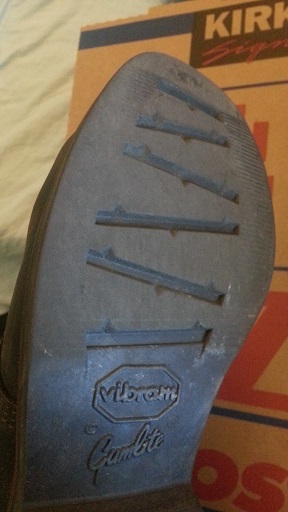 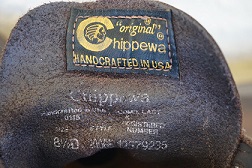 Stitching is great with no irregularities but one of the eyelets isn't quite where it should be and one of the speedhooks are slightly canted down. The latter can be fixed by a cobbler and the former is to be expected from most shoe manufactuers. The majority seem to eyeball it when riveting eyelets. 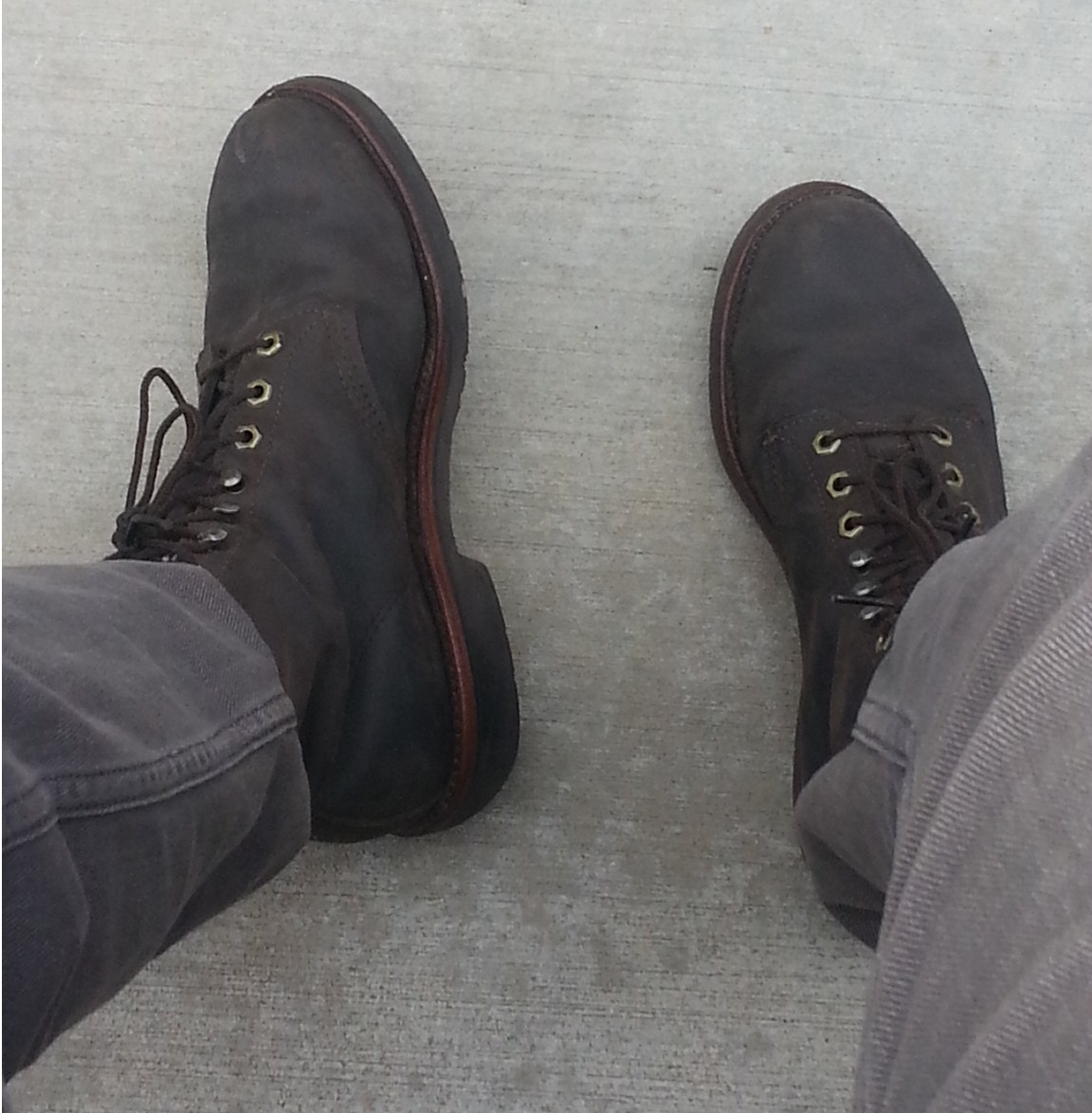 As I said creasing isn't bad, and some of the secondary creasing on the toe could've probably been remedied by proper sizing. Once the toe has gone a bit flaccid these definitely satisfied by service boot itch. The overall profile is very agreeable unlike the rather bulky profiles of Iron Rangers. The nubuck leather is gorgeous once it accumulates scratches, very much like its color description of "chocolate." Don't be overzealous with that lexol or you'll lose that depth of color.

I look to these as an intermediary between lightweight, flexible sneakers and work boots. In that category, I'm more than content with their existence. They seem to no longer be running sales of them on Amazon and I rarely see them on Ebay so you'll have to look somewhere else for a boot boot at the sub $100 range.

Got a beater pair boyos. 40 bucks.

Strong "meh" on these. The leather us not nubuck but some sort of calf. I fully understood what I was getting by the pictures, but the loose grain is impressively bad. Unlike the nubuck pair, these are distant relatives of the sauna. Fit is fine, and comfort is great thanks to the sole.Just sweaty. 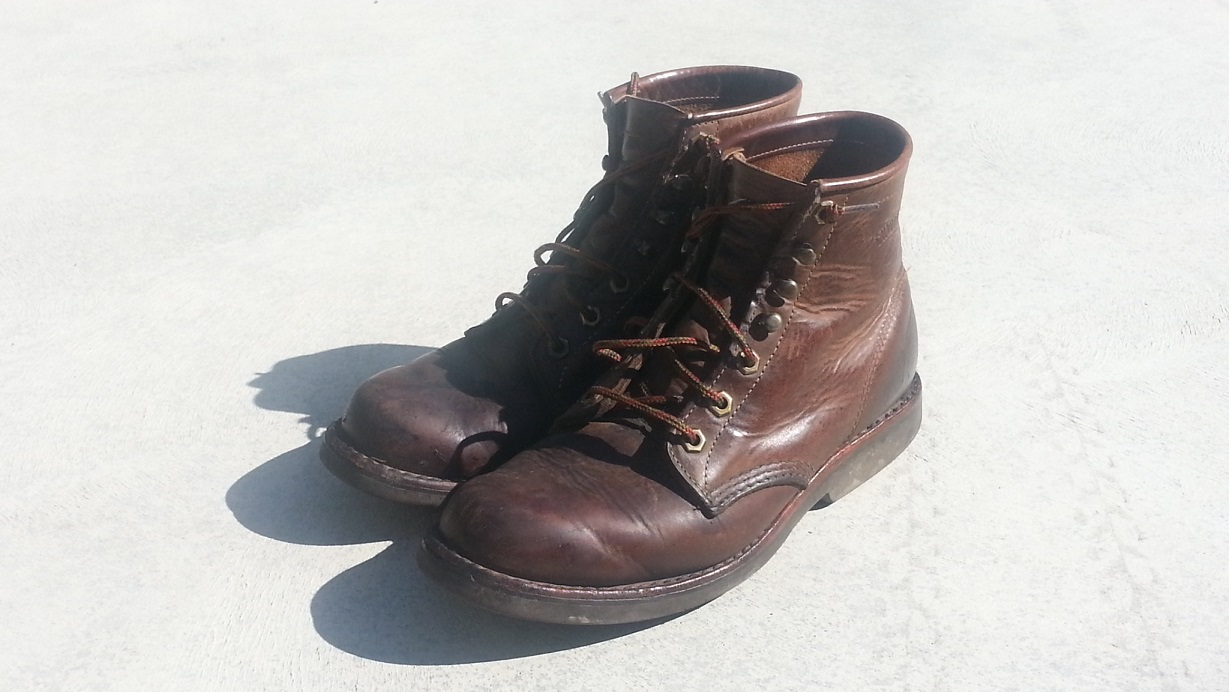 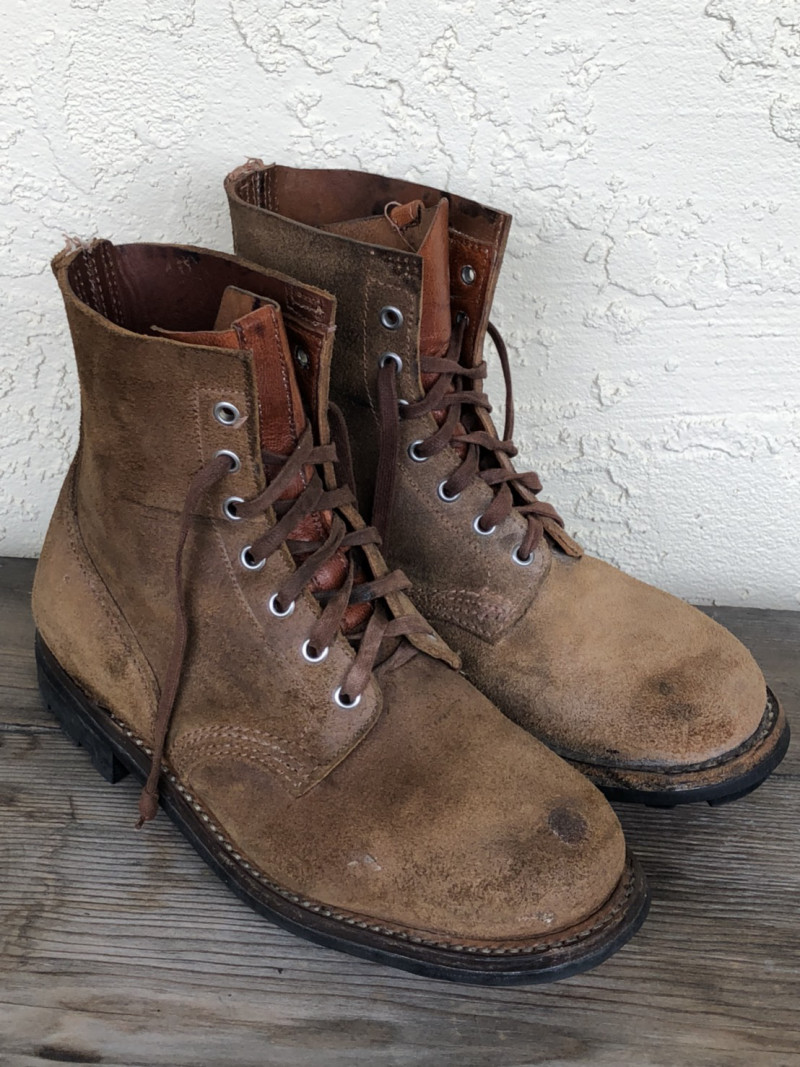 I love not spending money

These are modelled after the American M43 boots issued to Airborne and Ranger units, hence their name. Unlike previously issued 6" ankle boots, the boots integrated the gaiter onto the cuff simplifying things a bit. While American footwear was a bit of a status symbol for the French, this design would later be copied by the Italians and Dutch. The French added a lugged sole and after a few cuff variations, the 1955 pattern is what you see here. The leather is roughout not suede like it's often written, apparently to better retain an anti-radiation treatment better. How grim. Later in the 70's and 80's some French troops would stain their boots black in the field and they eventually turned to a pebble grain black leather. They were used from the Suez Canal, Algeria, to as recently as Chad. The black variants were planned to be phased out in 2008, but they seem to stick around in off-duty roles. A huge amount was also exported as military aid to former African colonies.

Availability is mixed in the US. They seem to be all over the place in Europe, but the brown variations run around $120, while the black ones are simply nowhere to be found. A Belgian shop had boots for a ridiculous 13 Euro

Black Chinese repros are of course out there too.

Its build is unapologetically FRENCH. Roughout leather, a contoured synthetic sole, wine-colored flat laces, they really spared no expense for an issued item. They also came scented of leather and cigarettes. They're practically spitting Perrier in your eyes.

Stitching is questionable at places but nowhere critical. No problems, really. Even the aluminium eyelets are spot-on. The leather is just gorgeous. Truly unfortunate that it accumulates marks quickly. I think even suede could fare better. I also really like the sole pattern. The right mix of simplicity and elegance, much like the early panama soles. They come with no insole so if you're a masochist who likes brass nailheads digging into your heel, these are for you.

I cut off the buckle portion because I'd like to not cosplay. I'm already horrifying to look at in the first place.

In 80 years some obese reenactor is going to wish death upon my extended family. Who even reenacts Indochina anyway? Wasn't colonialism epic? On second thought everyone will be dressed in combat boots in 80 years, picking off fellow humans for the last plot of arable land. 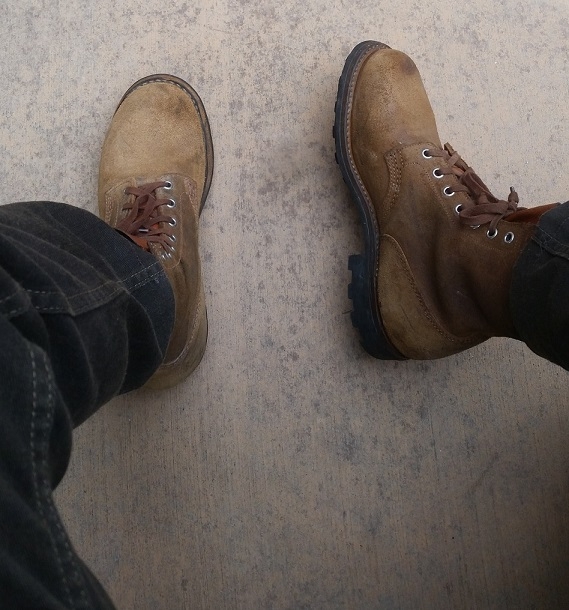 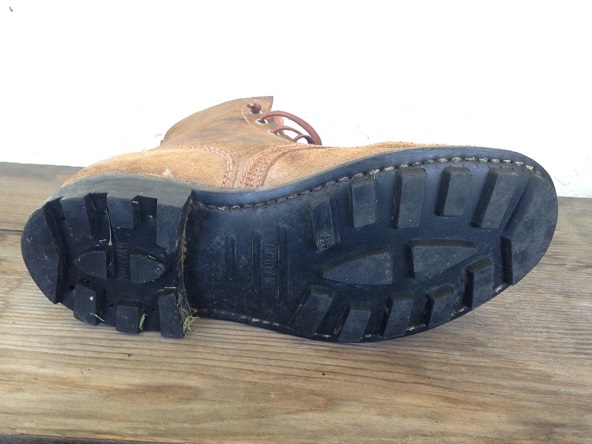 I was fully expecting these to obliderate my frail, woman-like body with its weight and stiffness but the sole is surprisingly flexible. Some truly impressive vulcanization for something older than my dad. I still have to adopt a rolling gait due to the thick, rigid leather but I expect it to break in. Some squeaking due to the tongue, making me sound like someone chewing on rubber dish gloves. 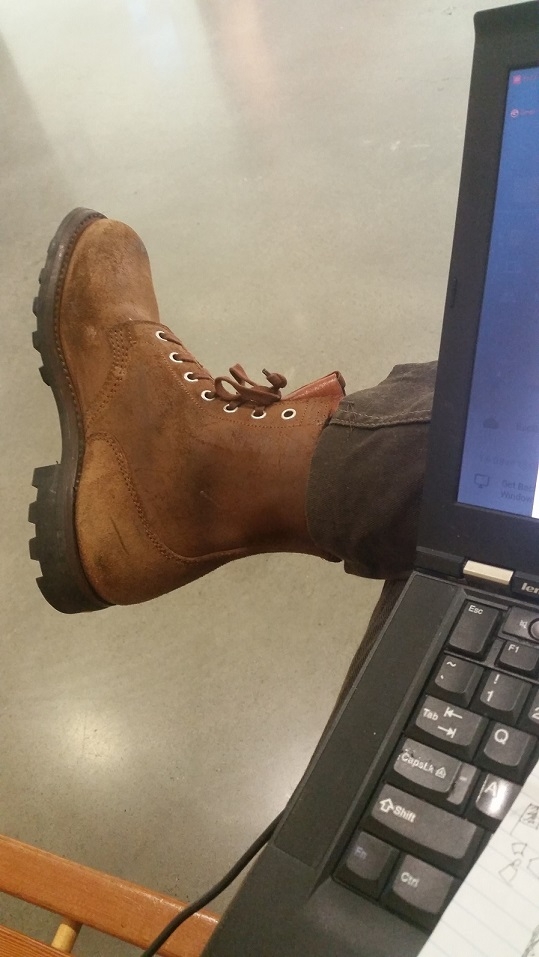 I paid $40 for these and I still have my OEM knees. Pretty decent for surplus.

Finally put stitching on the collar. Brings it all together I think. 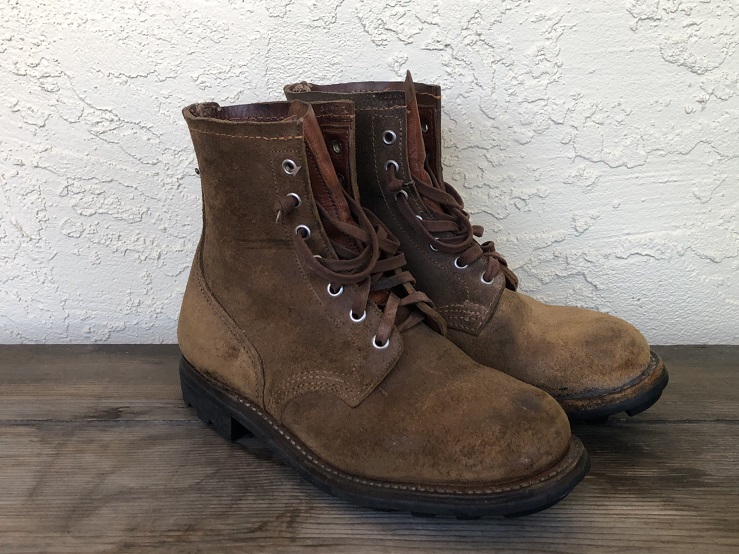 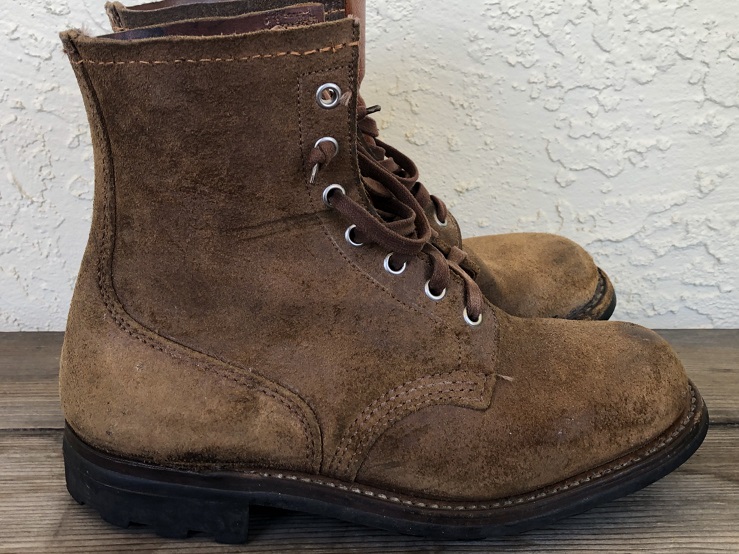 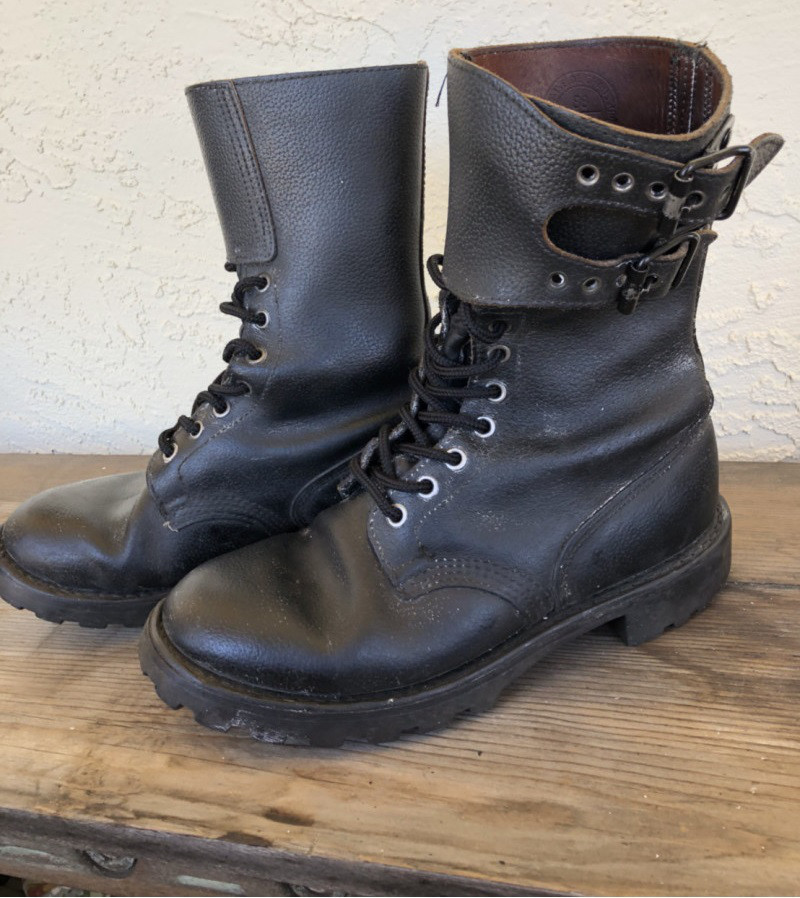 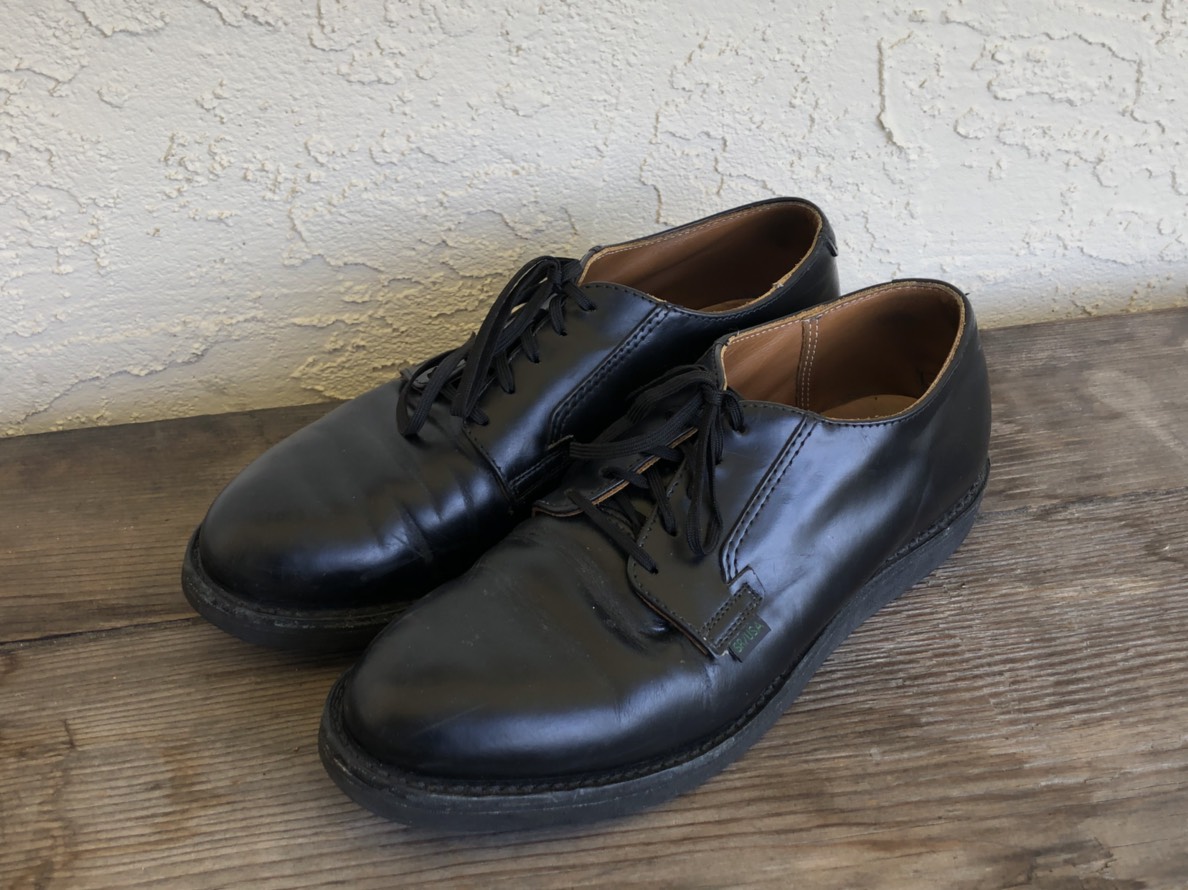 Red Wing is a Minnesota shoemaker established in 1905. Like other turn of the century footwear companies, they got their start making leather ankle boots for the US military. Today, their business is split into primarily two divisions: Workwear and heritage. Workwear is your conventional mesh upper, cushioned collar, PU molded sole boots. The Heritage line is a self-indulgent throwback to their 20th centry catalog, spearheaded by Aki Iwasaki. Perhaps the best-known boot is the Iron Ranger, modelled after miners' boots.

What's special about Red Wing is their manufacuring and materials. The majority of their lines are made in the US, if you care about jingoistic little croutons. They also source the leathers from S.B. Foot , another Minnesota tannery that Red Wing acquired in 1986. S.B. actually predates Red Wing by around 30 years.

MSRP lingers around $300~400 but the used market is very active, and you can get factory seconds for around ~$150. I highly recommend either path if you're not paying for these boots with an employer's stipend. Seconds in particular are marked with a hole on the tongue. Most people report superficial scratches as the only visible flaw. Some even report flaws on the sole, which is essentially a non-issue.

The Postmans are a rather old design made for postal workers. It treads the line between heritage and workwear, still seeing use by postal and resturant workers. 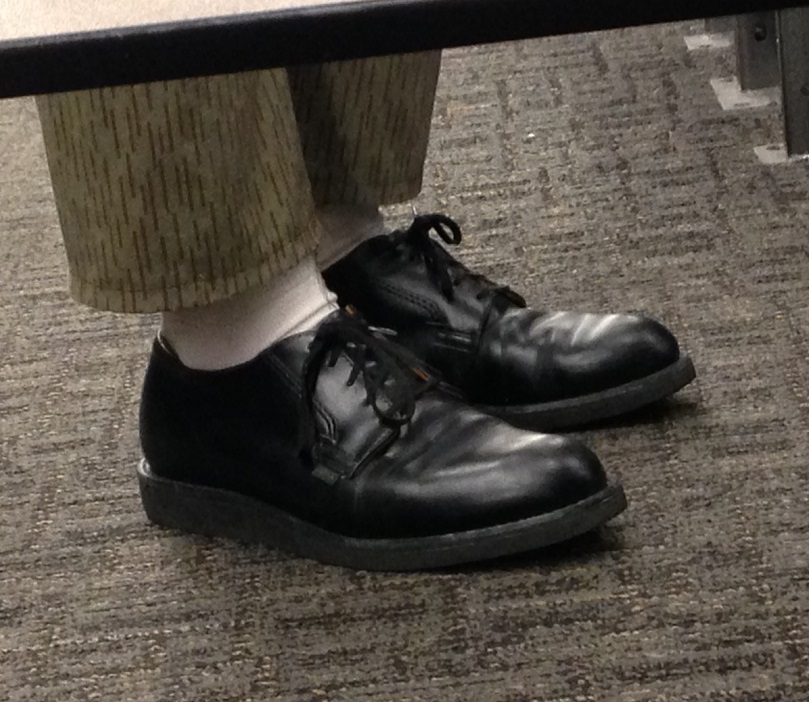 I needed some black derbies and Red Wing was a no-brainer with their history. It features a comfy wedge sole and no heel, making it very accessible to someone who's not used to heeled boots. The use of blind eyelets, thin laces, and a relatively slim last gives it an elegant flair. They are still derbies with an unconventional sole, however. I still wore them to job interviews though.

I don't like the leather. It's very close to patent and shines up nice, but feels plasticky. Then again most RW shoes feel like that, but Postmans aren't really known to handle scratches and wear gracefully. 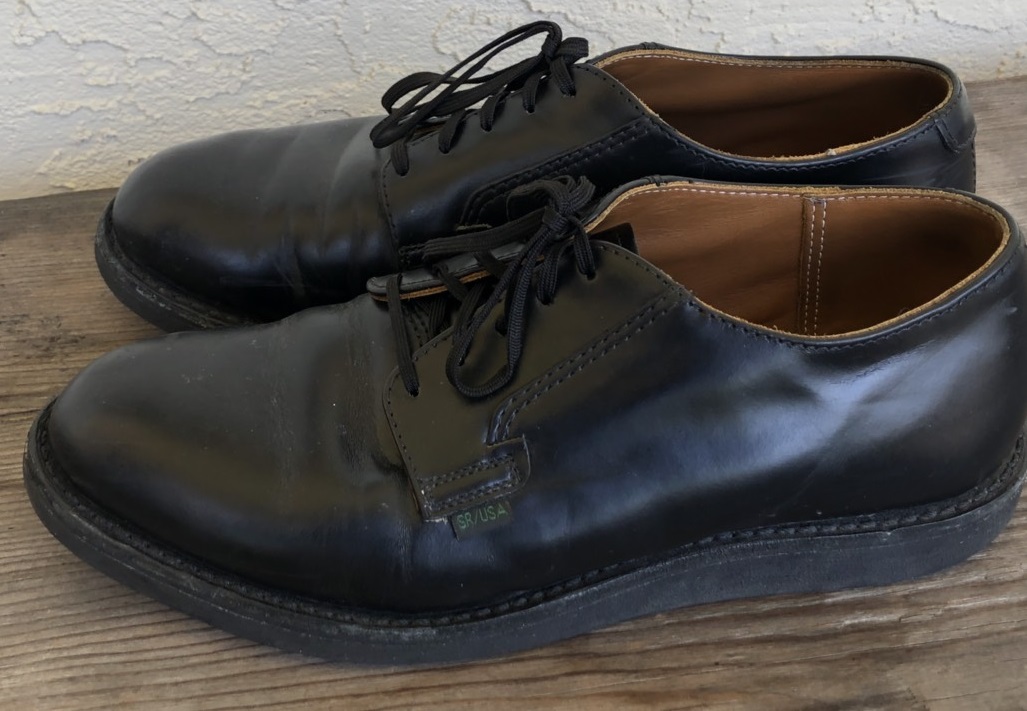 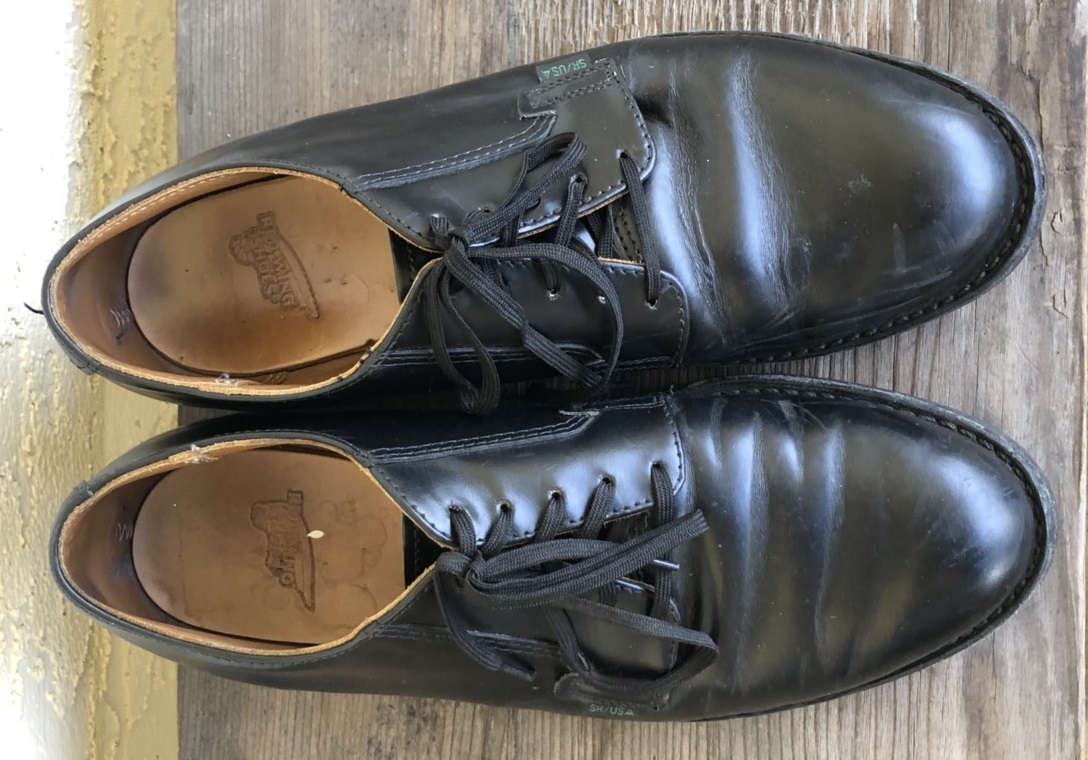 Red Wing quality is pretty analgous to other mid-tier shoemakers. I haven't really seen "they mangled muh boots" posts on reddit so their QC is fairly impressive. 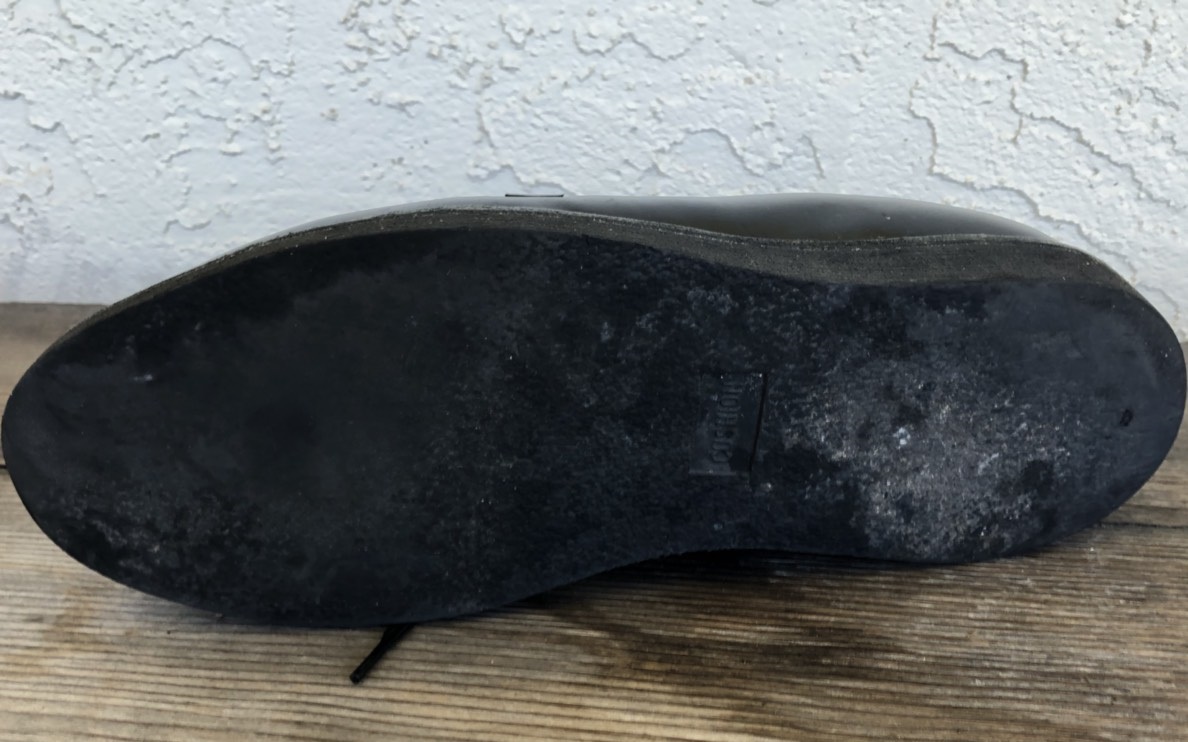 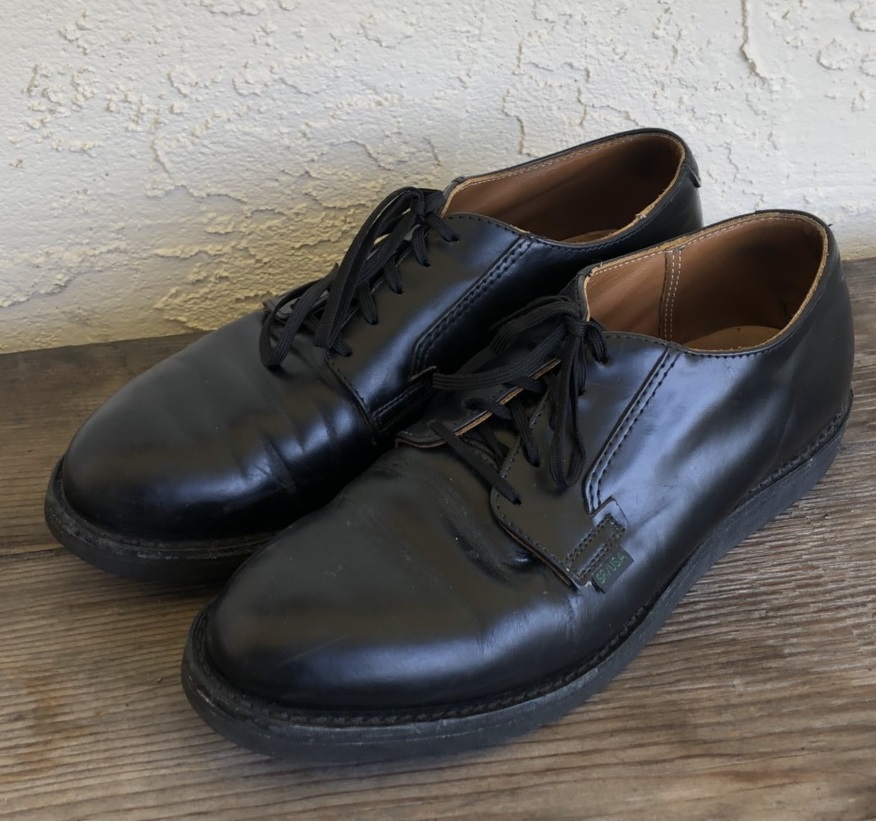 They don't require much break-in, surprisingly. Some report some discomfort at the bacck of the heel but I've had no issues. The sole is flexible but not particularly bouncy. All in all a fairly comfortable shoe. 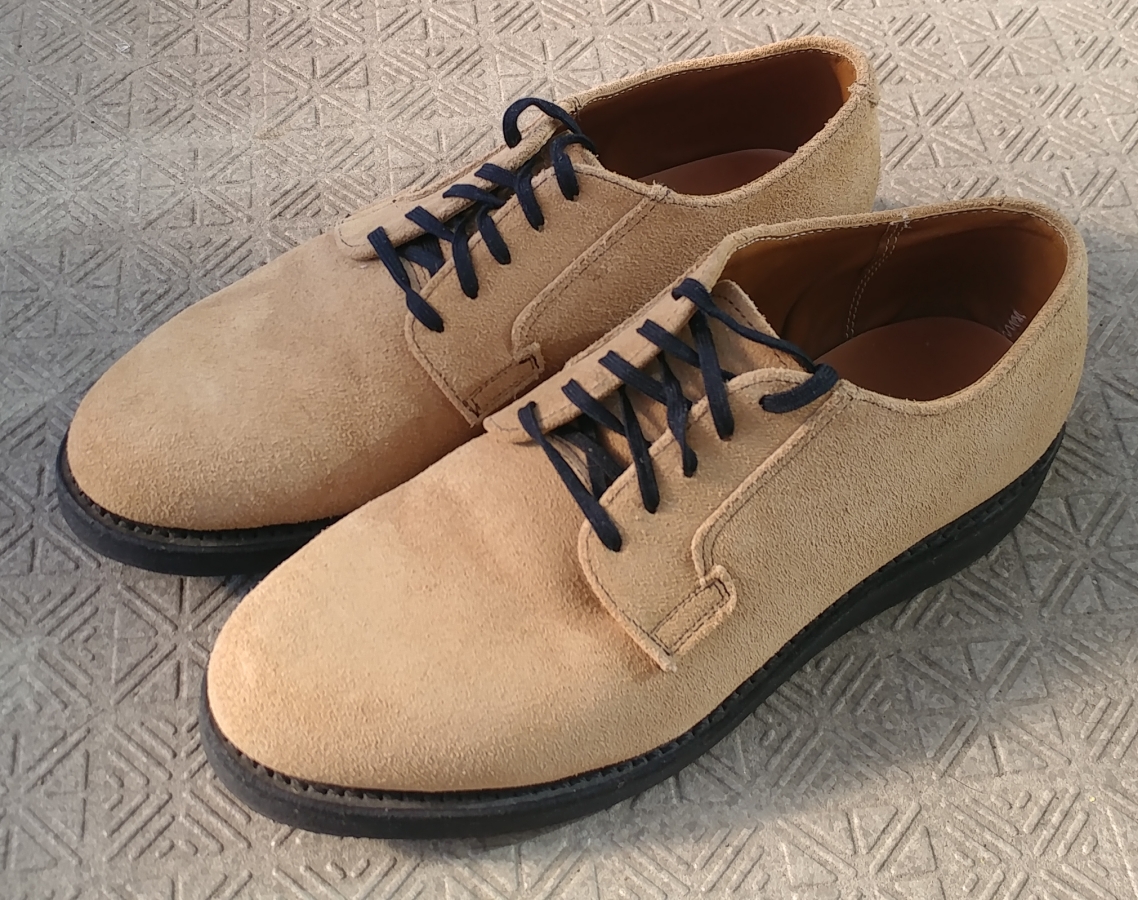 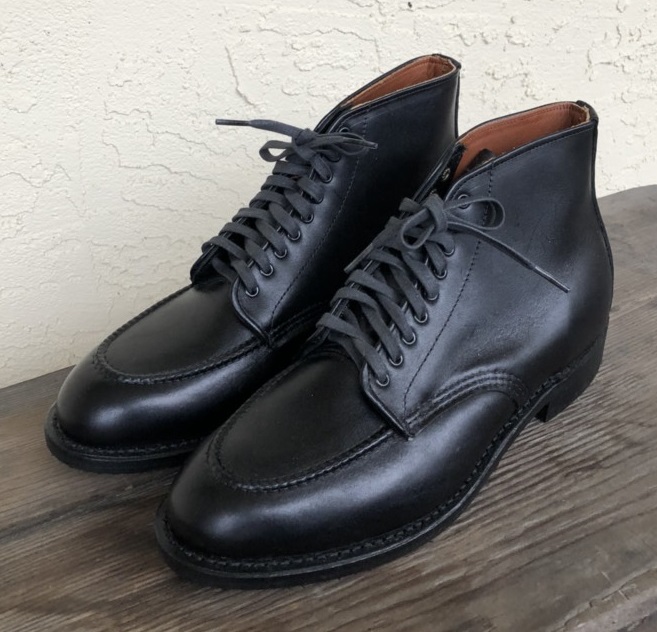 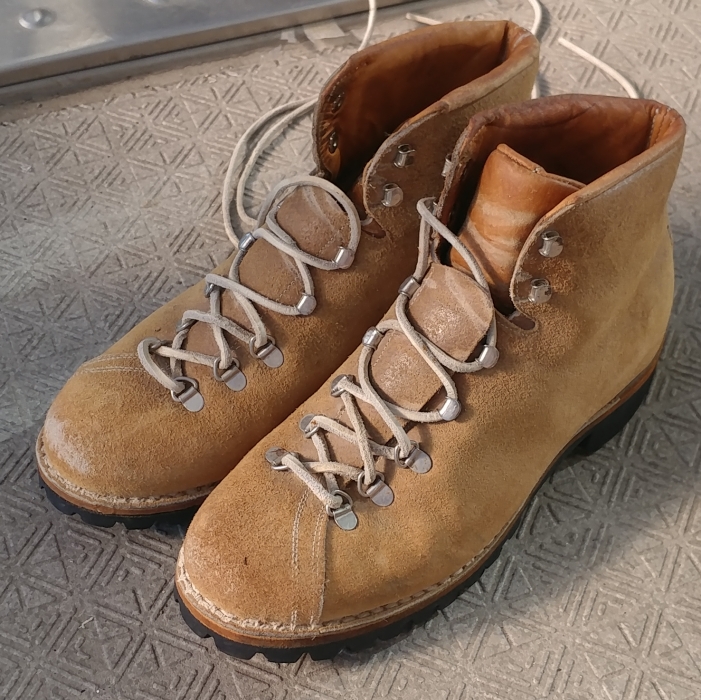 Raichle was a Swiss footwear company most famous in distant circles for their Flexon ski boot. Like most leaded-gasoline era boot companies Raichle was a subcontractor for the army. Alongside Bally, they produced the flat-toed Swiss ebirgsjäger Bergschuhe, which sounds like gargling a mouthful of carpentry nails. Suitable for the alpine climate, they had thick leather uppers, an overlapping tongue, and cutouts for skiis in the heel. Until the end of WWII the boots featured a leather sole impregnated with an assortment of hobnails and taps, closely resembling the German mountain boots. Instead of tampling on top of perforated Albanian civilians, Swiss troops stayed firmly planted within Switzerland, even if the country was at least partially bankrolled by "reclaimed" Nazi gold. Later boots were fitted with a lugged synthetic sole until they were phased out entire in the 90's in favor of the KS90.

Raichle would continue to make mountaineering and ski boots into the grotty 60's and retina-cauterizing 80's until its brand dissolution by their parent company Mammut. Boots like this are still reasonably common on ebay with some bearing evident signs of hard use, like a coating of glue around the welt, an old trick by hikers to keep water out. 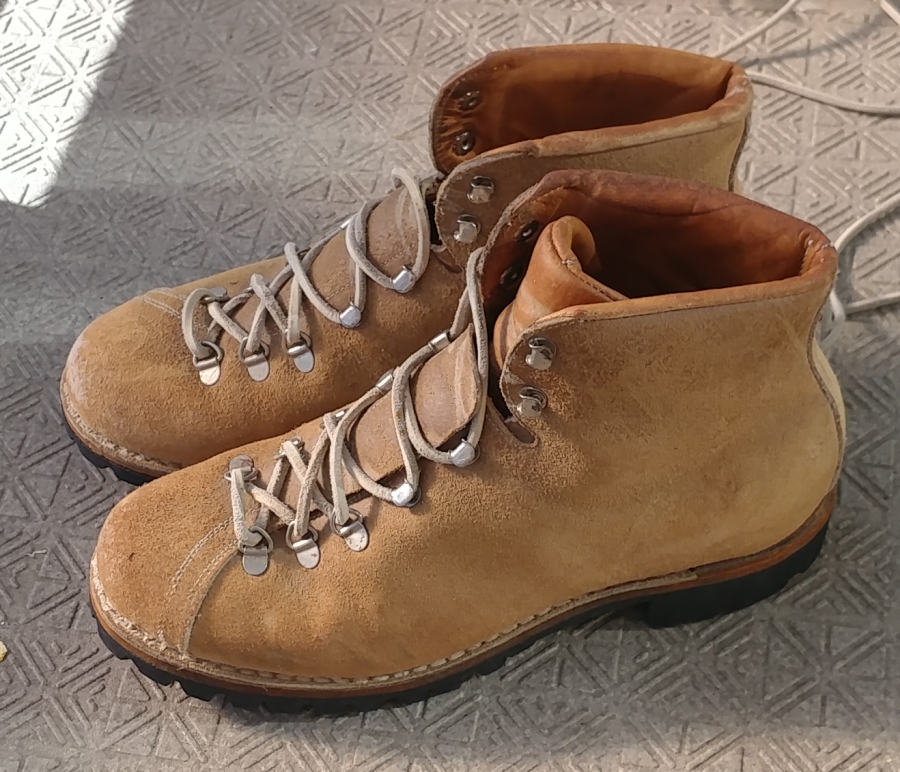